How It`s Made | Bánh mỳ
How It’s Made (Comment c’est fait in Quebec) is a documentary television series that premiered on January 6, 2001, on the Discovery Channel in Canada, and Science in the United States. The program is produced in the Canadian province of Quebec by Productions MAJ, Inc. and Productions MAJ 2.[1]

How It`s Made | How It’s Made Living Walls 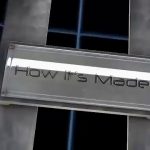 How It Made | Aquarium Fish (Goldenfish)

How It`s Made | Lego